MARTIN RHONHEIMER, born in 1950 (Zürich, Switzerland), studied History, Philosophy, Political Science and Theology in Zürich and Rome. He holds a Doctorate in Philosophy from the University of Zürich. In 1983 he was ordained a Catholic priest (incardinated in the Prelature of the Holy Cross and Opus Dei). Between 1972 and 1978 he was an assistant to Professor Hermann Lübbe, at Zürich University; from 1981 to 1982 he was a Research Assistant with Professor Otfried Höffe at the University of Fribourg. He then worked together with Professor Wolfgang Kluxen from the University of Bonn with a scholarship from the Thyssen Foundation, Cologne. He is currently Professor of Ethics and Political Philosophy at the School of Philosophy of the Pontifical University of the Holy Cross in Rome. In addition to his scholarly activity, he is also dedicated to pastoral work in Fribourg, especially for university students. Martin Rhonheimer is a member of the Editorial Boards of The American Journal of Jurisprudence (Notre Dame Law School) and of the Fordham Series in Moral Philosophy and Moral Theology (Fordham University) and member of the scientific board of Acta Philosophica (Pontifical University of the Holy Cross). In 2002 he has been appointed as a corresponding academician to the Pontifical Academy of St. Thomas Aquinas 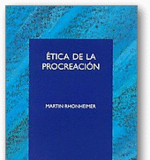