US researchers have found a way to produce immortal cell strains and tissue types from diseased patients by converting their cells into pluripotent stem cells with the same genetic errors. The new cell lines will enable scientists to investigate ten different genetic disorders like Parkinson's, muscular dystrophy, and type 1 diabetes in the test tube instead of in the patient, a huge step forward compared to current methods.
The study is the work of researchers from Harvard Medical School, Massachusetts General Hospital, and the University of Washington, led by Howard Hughes Medical Institute investigator George Q Daley who is based at Children's Hospital Boston. It is published in the advanced online publication of the journal Cell on August 7th.

Although scientists have for years been growing human cells from diseased patients in the lab, current methods are unsatisfactory because cells taken directly from patients have a limited lifespan, and when these are modified to make them "immortal", their physiology can change and make the results questionable.

Induced pluripotent stem (iPS) cells are gaining ground in stem cell research because like embryonic stem cells, they have the potential to turn into almost any type of cell and body tissue, and the cell lines go on for ever; they don't have the limited lifespan drawback of cells taken directly from patients, or the inherited characteristics of the tumor or diseased tissue from which they were derived. This allows scientists to study "healthy" tissue cultures with the genetic code of the disease as well as the diseased tissue.

Thanks to a fund from the Harvard Stem Cell Institute, the stem cell lines will be available to scientists worldwide. It is possible to create stem cell lines for other diseases too, said the researchers.

"Researchers have long wanted to find a way to move a patient's disease into the test tube, to develop cells that could be cultured into the many tissues relevant to diseases of the blood, the brain and the heart, for example."

"Now, we have a way to do just that — to derive pluripotent cells from patients with disease, which means the cells can make any tissue and can grow forever. This enables us to model thousands of conditions using classical cell culture techniques," explained Daley.

To make a disease-specific iPS cell line, Daley and colleagues took cells from a diseased patient and mixed them with a benign virus that introduced what they called "reprogramming factors" to induce the cells to become pluripotent, almost like a reverse engineering process that reprograms the cells back to a pre-specialized state. And the beauty of it is, the cells also have the genetic code that reflects the type of disease the patient has inherited.

Daley and colleagues then isolated the disease-specific iPS cells and analysed the genes to confirm that they did indeed have the same disease-causing defects as the original donor cells. And just to be sure, they also confirmed they were truly pluripotent and could differentiate into a range of tissue types.

The researchers are confident that in many cases these new iPS cell lines will mimic human diseases better than animal models. Although animal models like mice are close to humans in many ways, some things are too different to make them useful, for instance Down's syndrome does not cause the same symptoms in mice. New things that can be explored using iPS methods will be for example comparing how the same disease varies among different people, or how drugs might affect different people with the same disease. The scientists will be able to create iPS cell lines of different genetic types with the same disease defect.

In the longer term, as well as being useful for research into disease and drug testing, it is possible that iPS methods can be used to re-engineer a disease free version of a cell line specific to a patient then re-introduce them into the patient's body to replace diseased cells.

Although Daley and colleagues are making their methods available to other scientists so they can generate their own disease-specific iPS cell lines, as Daley explained, it will not be easy:

"They don't grow like weeds; they're more like orchids," said Daley, "you really have to tend to them," he added.

He has offered to collaborate with other scientists to help them perfect the method for the diseases they want to investigate. 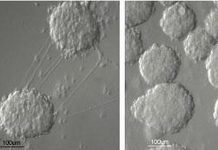